“It’s Okay to Say Gay” March being held in St. Pete in opposition to passing the bill. 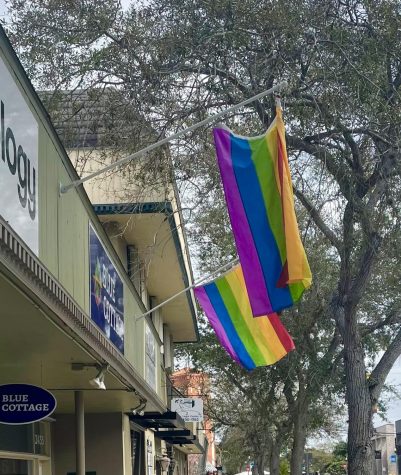 In our very own state of Florida, we are witnessing the rights and freedom of kids and students in the classroom attempting to be stripped away. A community that has been discriminated against and judged in our society is being targeted with this outdated bill.

Republican lawmakers are trying to pass a bill in which the LGBTQ community in grade school can not be discussed. This counter-progressive bill is sponsored by Joe Harding and Senator Dennis Baxley. It stops any classroom talk on gender identity or sexual orientation because it claims to not be “age or developmentally appropriate.” If the bill were to be violated by any teachers, parents could sue the school. The Florida governor Ron DeSantis doesn’t publicly state if he will sign it, but he did hint towards his support of the bill when he says the conversation of your gender in school is “inappropriate.”

In a study conducted by Caitlin Ryan’s Family Acceptance Project, they examined the impact family acceptance has on the youth’s mental health. People who had faced many rejections from their families as kids were eight times more likely to commit suicide, six times more likely to have high levels of depression, and three times more likely to use illegal drugs. These kids are already facing bullying, they struggle with self-acceptance, and have to go against the social stigmatization in their lives. Having positive environments, accepting parents, and friends helps increase the mental health of those who are afraid and stuck alone. After discriminatory laws like this are passed against this community, it has been proven that their well-being and mental health will decrease.

The Equality Florida advocacy group has an article on this bill where they state that “this legislation is meant to stigmatize LGBTQ people, isolate LGBTQ kids, and make teachers fearful of providing a safe, inclusive classroom. The existence of LGBTQ students and parents is not a taboo topic that has to be regulated by the Florida Legislature.”

Joe Biden, the current president of the United States expressed his concern and hatred this bill is founded upon. In a tweet, he stated, “I want every member of the LGBTQI+ community — especially the kids who will be impacted by this hateful bill — to know that you are loved and accepted just the way you are. I have your back, and my Administration will continue to fight for the protections and safety you deserve.”

As of Thursday, February 24, the Florida House of Representatives approved the legislation. The “Don’t Say Gay” bill is now moving to Senate with a 69-47 majority vote. The University of North Florida’s Public Opinion Research Lab conducted a statewide poll of voters, showing a stronger opposition to the law with 49% opposing and 40% supporting.  But despite “rebellion within the House GOP ranks as seven Republican lawmakers broke with leadership and opposed the passage,” this bill continues to make its way through the state(Equality Florida). Public policy director Jon Maurer states, “LGBTQ people are a normal, healthy part of society. We are parents, students, and teachers. We are your family…This bill is about erasing our existence.”

In our local St Petersburg Florida, a rally organized by St Pete for Change and Keep Pinellas Blue is being held on March 12th from 4 to 6 pm. It will be located at North Straub Park, where a march will take place after public speakers. Michele Rayner, State Representative and candidate for congress, and Caprice Edmond, a Pinellas County School Board Member will speak on the current issue at hand.

It is 2022 and we still have to fight for the rights of certain members of our society who are targeted and discriminated against. It’s time to do better.