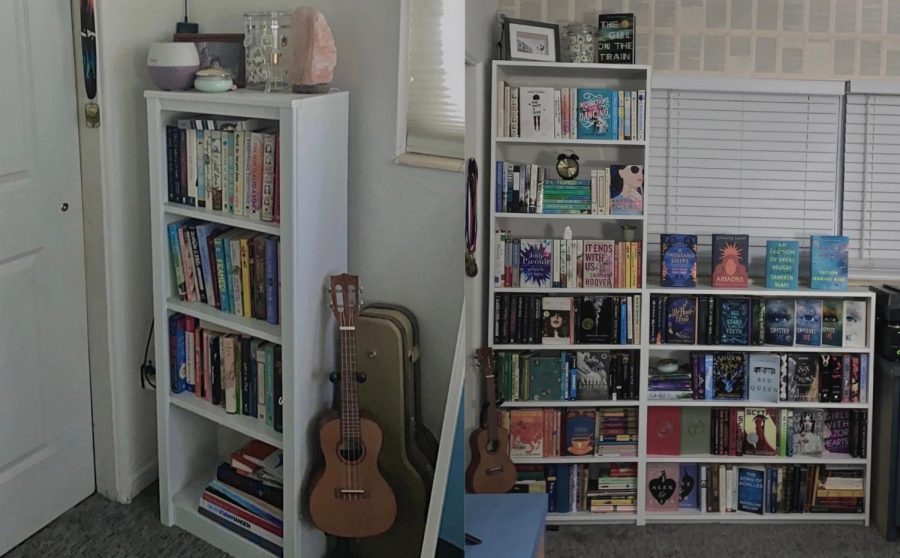 The progression of a reading addicts bookshelf...

Why are students still reading outdated, over-taught books in schools? From To Kill a Mockingbird by Harper Lee, to Mark Twain’s The Adventures of Tom Sawyer, the high school curriculum’s exploitation of problematic novels has no end. These books are riddled with harmful stereotypes and archaic generalizations, aside from many of them being unappealing to the younger reader. While these books may be enjoyable to some people, novels that appeal and relate to a larger group of students may urge them to actually complete the assigned reading. Some of these classic novels are still vital to our curriculum for teaching the history of literature to students, but the reading list could use some improvements. It is crucial for the upcoming generations to educate students with books containing diverse characters and amusing storylines to create a more progressive and successful learning environment within the classroom.

The high school reading list has shown little change over the decades, however, the students reading these books have. As the demographic of students is changing, so should the literature being exposed to them. Today, teens of all races, genders, physical capabilities, and sexualities are enrolled in the school system– so it’s time that the syllabus reflects that. When given the ability to relate oneself with a character, students can find a larger enjoyment in their reading material. The English reading curriculum should no longer be centralized around the “white male” that is commonly represented as the main protagonist in these classic novels. With a more diverse population of students, it is vital to provide a curriculum with relatable characters for everyone. Not only will diversified books help students feel more connected with the material, but they will push individuals to erase the “white male” superiority stereotype that is displayed in all forms of media and the real world.

Taylor Jenkins Reid is a New York Times best-selling author, regarded highly for her award-winning novel Daisy Jones and the Six. Taylor Jenkins Reid lives in Los Angeles with her husband and daughter. Her novel titled The Seven Husbands of Evelyn Hugo was published in 2017 and has gained a great deal of attention since its release. This heart-catching story describes themes of love, loss, discrimination, and the cost of fame. The novel recounts the life of Evelyn Hugo, a famed movie star, through a reporter by the name of Monique Grant. From Evelyn’s rise to stardom in the 1950s to her retirement from show business in the 80s, the life of Evelyn Hugo was a glamorous and scandalous one. Throughout the novel, Evelyn struggles with her identity as a queer, Cuban woman. These features that we see in Evelyn are relatable to a large demographic of today’s students. This Goodreads Choice Award Nominee contains a multitude of plot twists and distinctive characters that would make the novel appealing to high school students. The captivating storyline and analytical themes would mark this book as a prime example of a modern classic.

The publishing industry is a challenging environment. Diversity in the publishing world is important for amplifying the voices of minority groups who are not justifiably represented in the book community. According to the Lee and Low Diversity Baseline Survey from 2019, 76% of people in the publishing industry are white, 97% are cis-gendered, 81% are straight, and 89% are non-disabled. These statistics reinforce the claim that diversity in the publishing industry is severely lacking. While this study includes publishing employees exclusively, it still displays an issue that can be found in the writing world as well. Having books written by more diverse authors be taught in schools can help eliminate the belief that you must come from privilege in order to be recognized as a successful author. Reading books with various authors can encourage teens from minority groups to pursue a writing career as well. Being taught about prosperous authors who are exclusively straight, white, and able-bodied, compartmentalizes an idea about who can be a successful author and who cannot. Varying authors being represented in school curriculums would also help to bring more attention to those who are underrepresented in the industry.

V.E. Schwab is a genderqueer author who is recognized centrally for their Shades of Magic trilogy, Villains duology, and Oprah Daily’s, Coming Out essay on the journey of understanding one’s relationship with gender and sexuality. V.E. Schwab writes adult, young adult, and middle-grade novels. The Invisible Life of Addie LaRue is a New York Times bestseller that was written over the span of ten years and published in 2020. This novel follows the 400-year life of Addie LaRue from 1414 France, to the United States in 2014. Addie wants to travel the world, rather than fall subject to the life of a housewife, as many other women did. She makes a deal with a god, asking for the freedom to see the world. While granting her wish for freedom from her small town in France, the dark god also curses her to be forgotten by everyone she meets. This book can be analyzed in a variety of different ways. The life of Addie LaRue describes the desire to make a mark on the world, displayed through individuality, art, love, loneliness, and remembrance. Students can connect to Addie through her longingness to be something in life. The story expresses a powerful message about what it can feel like to be forgotten. The Invisible Life of Addie LaRue also contains a villain of which we are shown different perspectives. With this, students can be introduced to the function of a villain and what his development added to the story. As well as being a well-written antagonist, Luc is a great example of a villain who had no choice. V.E. Schwab continues this theme of two-sided “bad guys” in the Villians duology, rumored to be completed in later years through the release of Victorious. The first book, Vicious, is a story that centers around two college students who give themselves superpowers. The book centers around the lack of difference between good and evil, as well as focusing on how some individuals prioritize their well-being over what is considered “morally good.” Teaching Vicious in schools would provide students with the opportunity to understand the multi-sided concept of being the “bad guy” in a work of literature. Students would be able to analyze the duality of Eli Ever and Victor Vale through their ethical choices.

Novels like The Great Gatsby by F. Scott Fitzgerald or The Catcher in the Rye by J.D. Salinger have become normalized assets to English class curriculums. These novels, similar to many other popular classics, are centralized around the white male perspective. Younger people are impressionable to the media they consume. Adolescents are greatly affected by the books they read when they are younger. When the main books being prioritized in schools are concentrated on this isolated idea of white, male privilege, the minds of younger readers can develop a misleading paradigm as to how society should function. Having a more inclusive assortment of books on the school reading list would help students escape from these bigoted ideas.

Angie Thomas is a young adult novelist, known mainly for her 2017 debut novel, The Hate You Give. Since its publication, this novel has been adapted into a movie and won a multitude of awards. The Hate You Give follows the life of a high school student named Starr Carter who lives in a poor neighborhood as well as goes to an expensive prep school. While struggling to balance her two worlds, everything changes after her friend Khalil, an unarmed black man, is shot and murdered by a police officer. This book deals with real, modern issues that occur in society like police brutality, racism, and discrimination. Starr works to ensure justice for Khalil throughout the progress of the novel. The Hate You Give teaches students about real-world problems that they can relate to, thanks to the realistic characters. Throughout the years, English classes have been teaching books about racism in history, like To Kill a Mockingbird by Harper Lee. The Hate You Give provides a perspective on the ways that racism is still affecting our society today.

Over the years, many of the classics that surround students in schools have been adapted in a myriad of ways. Whether it was set in modern times or the storyline featured zombies, there are multiple ways that one can create an adaptation. Adaptations like such are able to teach the story of these classics in a way that is more engaging to young readers. Classic reads have been adapted into graphic novels, films, television shows, and renditions as simple as another book. Adaptations can be fully accurate to the original writing, or they can include certain storylines that weave into a new one. For example, Pride & Prejudice & Zombies by Seth Grahame Smith is an adaptation of Jane Austen’s Pride & Prejudice. This adaptation tells the story of Elizabeth Bennet and her sisters in a world that has been overrun with zombies. This sci-fi addition adds an entertaining aspect that appeals to more readers. By keeping the original plotline, this book is also able to intrigue the enjoyers of the original novel. There are many examples of classical adaptation that would be sufficient additions to the school reading lists.

Madeline Miller is the acclaimed author of The Song of Achilles and Circe. Published in 2011 and 2018, these novels have become well recognized Greek mythology adaptations. The Song of Achilles reimagines the story of Homer’s Iliad, from the perspective of Achilles’ dearest companion Patroclus. This retelling explores the historical speculations that wonder if the relationship between Patroclus and Achilles was more than platonic. This novel is a great example to readers of how the perspective of a narrator can change the way a story is represented. In the Iliad and the Odyssey by Homer, Achilles is portrayed as a hot-headed demi-god, driven by glory and fame. In The Song of Achilles, Madeline Miller displays a side of Achilles that is less prominent in the original poem. Patroclus chooses to recognize the good parts of Achilles, shielding himself from the bad. Studying this novel as a comparison to the Iliad would teach students about the power of narration. This novel is a good example of how adaptation can vary from the original text. Another classical retelling that students would find entertaining is These Violent Delights by Chloe Gong. This heart-wrenching novel is a reimagination of Shakespeare’s Romeo and Juliet, set in 1920 Shanghai. The protagonists of this adaptation, Roma and Juliette, are the heirs to rival gangs in Shanghai. When a monstrous plague overtakes their inner circles, they are forced to team up and find the culprit. This novel tells the tale of Roma and Juliette with a supernatural plot that will catch the attention of young readers. The book is also filled with relatable characters that students will love to read.

In summary, there are many diverting novels that would prove themselves worthy on the high school reading list. The existence of classics in school still remains important for teaching the evolution of literature through the years, though the current selection is not yet ideal. With some improvements, the English curriculum can work to make students feel more represented in their literature and feel more motivated to do the assigned reading. From The Seven Husbands of Evelyn Hugo by Taylor Jenkins Reid to Chloe Gong’s These Violent Delights, the English class reading list has a number of choices to select from.